Stilo Editrice, a cooperative company with its headquarters in Bari, has been operating in the publishing sector since 1999. It has published 220 titles, which are currently subdivided into 12 series. Most of its catalogue consists of essays or collections of essays; the works are aimed both at general readers seeking to broaden their knowledge of particular subjects, and at those interested in more specific research. The main categories are literature, philosophy and social studies; authors are selected and either have a university – or secondary school – background or are prominently active at a social or civic level.
In the LITERATURE category Stilo publishes: works of ancient and modern literature, classical authors and both Italian and foreign fiction; anthologies of poetry based around specific themes (the Resistance, the Holocaust, music, etc.); handy single-subject volumes on classical literature; important works of regional literature that tie in with the great European literary traditions; (unpublished) contemporary fiction, particularly short stories. Other works published include studies and research by university authors. Two series are edited by an international panel of academics.
Distribution in Italy is handled by Libro.Co and, in the Puglia region, by CPE as well as by a network of associated bookshops that are listed on the website; all books are also available in electronic format through Simplicissimus.
Stilo has an e-commerce service on its own website and also sells on Amazon and through other internet outlets (Ibs, Bol).
The publishing house has a press office which, as well as ensuring that reviews and news appear in newspapers and magazines, organises numerous presentations of new titles in bookshops, in libraries and at literary festivals – as can be seen on the diary page of the www.stiloeditrice.it website. Activities are promoted through the constant updating of the website, the use of social networks (Facebook, Twitter) and mailing lists for the various sectors.
Over a number of years Stilo has participated in various ways in a number of international book fairs: the Frankfurt Book Fair, the Turin International Book Fair, the Paris Salon du Livre, etc. A selection of its books can be found on the ICE-promoted website italbooks.com.

For a number of years Stilo has been organising the literary festival PAGINE DI RUSSIA, which aims to promote knowledge of Russian literature. 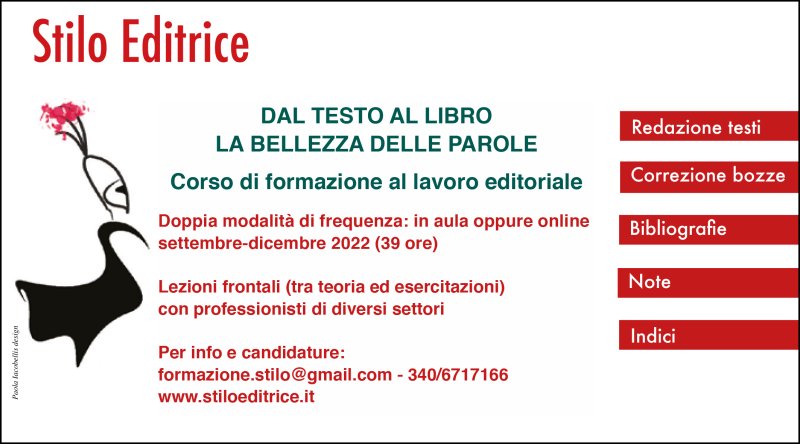